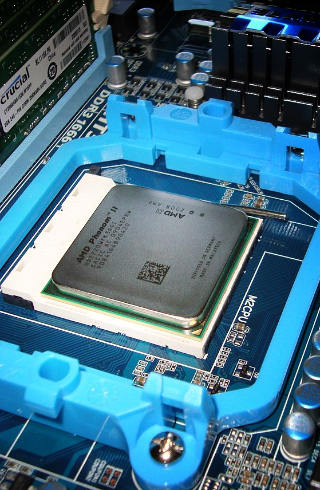 A CPU (Central Processing Unit) is an electronic device designed to execute sequences of computer instructions that make up computer programs. CPUs most commonly have a form of a single microchip (i.e. integrated circuit). On a general-purpose computer, CPU is the main execution unit, meaning that most of computer's software is made to be executed by a CPU.

The CPU also acts as a central logical hub for the entire computer system, therefore, CPU contolls the flow of data between various computer components.

Finally, the CPU is the main unit for control and enforcement of computer's security, privacy, and stability features. Amongst those features are: security policies, privilege system, process isolation, and resource management.

This page contains a list of all recommended desktop CPU models.

We advise against using Intel CPUs due to concerns of still unresolved security vulnerabilities and Intel's exhibited lack of commitment to design secure and error-free products. Intel's CPUs from the past have repeatedly exhibited a lack of concern for security and privacy.

The principal objection to using Intel CPUs, among varous other problems, is about inadequate process isolation mechanisms of their CPUs as a consequence of vulnerability to Spectre.

Another serious security issue with Intel CPUs is the existence of a so called ME (Management Engine). ME is an undocumented unit integrated on Intel CPUs which cannot be effectively controlled by the owner of the CPU. ME operates at the highest privilege level with all permisions granted but does not allow being fully contolled by the computer's owner.

In the table below: the list of recommended desktop AMD CPUs.

ECC (Error Correcting Code), when talking about a CPU and its main memory, is a mechanism which can reduce the probability of errors in the main memory.

A CPU's main memory is usually DRAM (Dynamic Random Access Memory), which has an expected error rate of about a few incorrect bits per year. When ECC is enabled on DRAM, it allows those few errors to be corrected.

Supercomputers, workstations and other important and mission criticall computers commonly use ECC on main memory. Lack of ECC is considered as very unprofessional.

In order for ECC to work, the following hardware features are required:

The third requirement is fullfilled by purchasing ECC capable DRAM memory modules. For all CPUs on the list, unbuffered ECC DRAM modules are required.

Finally, from the software side, the operating system should enable ECC and provide additional support for error monitoring and management. Most consumer versions of Microsoft Windows lack those additional features. Furthermore, if ECC support is not enabled in BIOS or UEFI by the motherboard manufacturer, then there is no way to make Microsoft Windows enable ECC by itself.

Operating systems (OS) based on Linux kernel can enable ECC on any capable hardware. If support for ECC is missing in BIOS and UEFI, the user can force the OS to enable ECC. The OS provides full error monitoring and management capabilities.

CPUs Based on Zen Architecture

Perhaps you were wondering why aren't any Zen based AMD CPUs recommended? Zen is a fast, modern and efficient architecture.

The reasons for not including Zen-based CPUs are:

It might be noticed that the recommended CPU list includes two CPUs based on Zen 2 architecture. Zen 2 improves upon the first Zen in the following areas:

Unfortunately, Zen 2 still contains an undocumented PSP (Platform Insecurity Processor), which cannot be disabled, scrutinized or modified. This is a big downside of Zen 2, and certainly a bad decision from AMD. Furthermore, the Zen 2 microarchitecture is new and unproven.

Therefore, we recommend Zen 2 architecture only under assumption of extreme caution, or for computer enthusiasts, hobbists and others who might find the risk acceptable, for use in non-sensitive and inconsequential roles such as media centers or entertainment hubs.

The only Zen 2 models that are recommended are those lacking SMT (Simultaneous Multithreading). We consider SMT to be an additional security and privacy risk.

Cortex-A53 and Cortex-A55 cores are resistant to Spectre because they lack speculative execution capabilities. Unfortunately, those two CPU cores are not sufficiently fast to get a full recommendation for use in desktops. They only have about half the speed required for a comfortable desktop use.

The only newer core is Cortex-A78, which is still not available to general public. As always, caution is advised when using a new CPU design, as it might contain yet unknown errors and security vulnerabilities.

Besides the hardened CPU cores, using an ARM CPU for a desktop computer would also require a full desktop platform consisting of:

Platforms that provide all the listed features are either experimental or expensive, and in low productions numbers at this time; therefore: not recommended yet.

A positive aspect of an ARM platform is that it promises to make possible a portable, low-weight, low-power, inexpensive, fast and efficient computer.

At this point in time such a computer seems to be about four years away in the future, so we hope to see it all become possible for petty cash by the year 2025.